As shoplifting lawyers, it is our job to protect you against getting a criminal conviction. Shoplifting is a “theft” offense and this type of conviction will cut you off from countless jobs. When a potential employer learns that you were convicted of “stealing” something, it makes you like a person that cannot be trusted.

We will explain the different types of shoplifting, penalties, and legal defenses available. 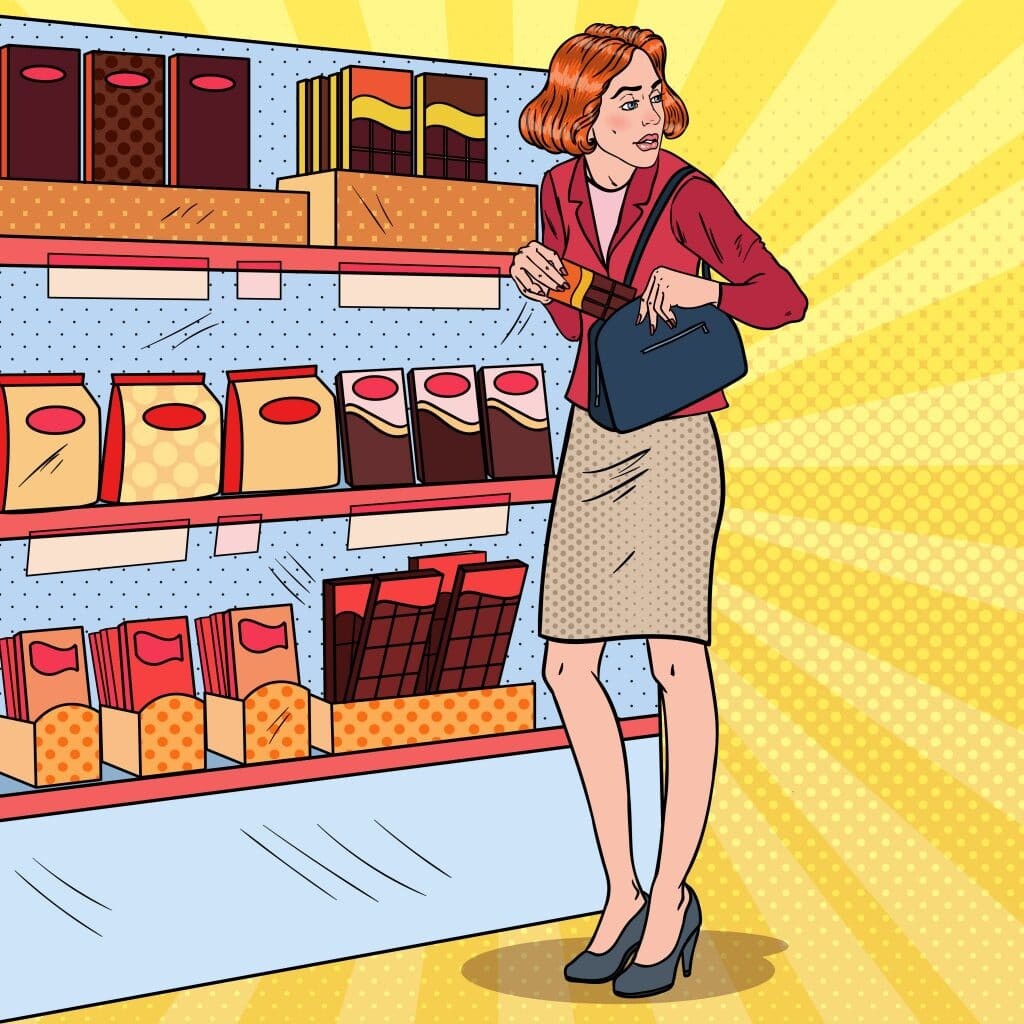 Don't Feel Like Reading?
Check Out This Helpful Video

For any person purposely to take possession of, carry away, transfer or cause to be carried away or transferred, any merchandise displayed, held, stored or offered for sale by any store or other retail mercantile establishment with the intention of depriving the merchant of the possession, use or benefit of such merchandise or converting the same to the use of such person without paying to the merchant the full retail value thereof.

Taking merchandise is simply “outright stealing”. You grabbed an item with every intention of not paying for it.

For any person purposely to conceal upon his person or otherwise any merchandise offered for sale by any store or other retail mercantile establishment with the intention of depriving the merchant of the processes, use or benefit of such merchandise or converting the same to the use of such person without paying to the merchant the value thereof.

This refers to a “first step” in stealing. You pocketed a lipstick while in the store so that you could easily walk out with it.

For any person purposely to alter, transfer or remove any label, price tag or marking indicia of value or any other markings which aid in determining value affixed to any merchandise displayed, held, stored or offered for sale by any store or other retail mercantile establishment and to attempt to purchase such merchandise personally or in consort with another at less than the full retail value with the intention of depriving the merchant of all or some part of the value thereof.

4. Transferring Items to Another Container

For any person purposely to transfer any merchandise displayed, held, stored or offered for sale by any store or other retail merchandise establishment from the container in or on which the same shall be displayed to any other container with intent to deprive the merchant of all or some part of the retail value thereof.

This happens at Home Depot all the time. Guys place expensive tools in cheap paint buckets. They pay for the paint bucket but intend to walk away with an expensive power tool.

For any person purposely to under-ring with the intention of depriving the merchant of the full retail value thereof. This is a unique form of shoplifting because it applies to store employees. Specifically, an employee at a retail establishment can be charged with shoplifting if he or she rings an item or items at a value lower than that which is being offered by the retailer.

Your friend works the register at Macy’s and intentionally rings up a lower price for your expensive item.

If you walk into a store with a “booster bag” to fool the metal detector at the entrance, you may get arrested for a misdemeanor charge. There’s no other reason for having a booster bag unless you intend to “steal” from that store.

The best shoplifting lawyers in New Jersey understand that these are difficult cases.
Retailers lose millions of dollars each year due to shoplifters.
As a result, if you are convicted of shoplifting, you face stiff penalties.
If the value of the merchandise is less than $200-, you are facing up to six months in jail & a one-thousand dollar fine.
Any type of theft in excess of $200- is a felony.
Please refer to the reference chart below to learn what you’re up against.

For immigration purposes, shoplifting offenses are classified as “crimes of moral turpitude”. This means that if you are not a United States citizen, and you are convicted of shoplifting, you may find yourself in Removal (deportation) Proceedings.

If you are a lawful permanent resident (LPR), this means that you hold a green card. Again, if you get convicted of shoplifting, you may lose your green card very easily.

A theft conviction reflects poorly on your character. Some people argue that a “thief” is not to be trusted. As a result, your character may come into question during your immigration interview.

Immigration officials expect non-U.S. citizens making an application to live and work in the United States to be of high moral character. It doesn’t help to have a shoplifting conviction on your record.

The defense to a charge of shoplifting depends on the facts of the case, including the value of the goods stolen, the evidence against the accused, and other factors.

For example, if a teenage kid takes a five-cent piece of candy on his way out of a convenience store, the judge will look at his criminal record, age, maturity, and harm to the business owner and may decide to dismiss the case.

Now, if the same kid has been caught “stealing” a five-cent piece of candy many times from the same or different stores, it is clear that he likes to steal and will be fully prosecuted.

On the other hand, if a long-time customer at a supermarket claims that she inadvertently dropped expensive baby formula into her purse, we would rely on the surveillance footage to defend her claim.

The point is that each case must be evaluated carefully. Each case is different and legal defenses vary.

We represented a person with a mental defect who genuinely “did not intend” to steal. He thought the store items belonged to his family. When he grabbed a toy and put it in his pocket, he really believed that the toy always belonged to him.

Avoid a Shoplifting Conviction with a diversionary program

If you are a first time offender, then depending on the type of charge, you may qualify for probation.

For example, if you are facing a misdemeanor (disorderly persons) charge, then you can apply for a Conditional Dismissal.

Now, if you are facing a felony (indictable offense) charge, then you can apply for Pre-Trial Intervention (PTI).

Here’s a great article to help you learn about PTI.

Pre-Trial Intervention: Everything You Need To Know In 5 Minutes!

As shoplifting lawyers, we are committed to fighting for you. You will benefit from our extensive trial experience.
Most importantly, we will be honest about your chances of winning your case. We never guarantee results. However, we absolutely guarantee that we will aggressively fight for you!

Your Shoplifting case is as important to us as it is to you. Your freedom is on the line. Each case is different and we welcome the opportunity to protect & defend you.

When you hire us, you will get complete access to us. We respond to all communications & really care about our clients. Our fees are reasonable and we offer payment plans.

See All Our Reviews
I am so happy I found Alan and his team. From the start he was very caring and understanding of our situation. He helped us with everything, explained everything and was there through every step. He is a true blessing. We went from the impossible to my boyfriend coming out, with no trial and only time served. I recommend him to everyone because he really took a hard case and gave us the best outcome. He is so patient and was so dedicated to this case. He spent all his time working on this and gave us the best outcome, from facing 60yrs to only getting out on time served (11months). I can’t imagine what would’ve happened if it wasn’t for Alan. Thank you so much Alan. Forever grateful!

Khloud Ghazy
20:28 07 Feb 20
Hey, this is Travis. Hope all is well with you guys. I just wanted to reach out and truly thank you guys for everything you did for me and my family and also believing in me at a point when I barely believed in myself. I am off the "conditional probation", and everything is over with. We have our three little beautiful girls (which The youngest just turned one a few days ago), we both have amazing jobs where we are very blessed to be making what we are making for our family, and we are in the process and about to go into contract with buying our first home (a BEAUTIFUL 400,000 dollar home).... Lizzy and myself just wanted to truly thank you guys for believing in me and doing everything you could so I can be in this amazing spot in life that my family is in. I owe a lot of this to you guys and I hope you know what you do does not go unappreciated and you guys are making a huge impact and you guys are a huge help on certain people's lives. This above was a text message that I just sent to Alan and Kevin. For anyone who is looking for AMAZING people to represent you, that will literally do anything and everything they can for you to receive the best outcome, then these are the people you want, I PROMISE you that. They literally made miracles happen on my multiple cases. Alan from day one made me promise him that I would do everything I could to better my life. I did that and in return I received the most amazing lawyers who went above and beyond for me and my family. I couldn’t of created a better pair of lawyers to represent me. If anyone is looking for great results on your case please give Alan and Kevin a shot and I promise you (because I owe a lot of my success right now to these men) that you will not be disappointed and they will do everything they can for you.

traviscp longendyke
15:41 04 Feb 20
Alan and Kevin helped me avoid prison on huge drug charges. Then, they beat my DUI case. They’re the perfect combination of aggressive and humble lawyers. Fees are very reasonable and they really cared about me. I totally recommend. My lawyers for life.

Geraldino Fils
00:32 01 Feb 20
MY LAWYERS FOR LIFE!!!!!Alan and Kevin are the Best!!!!!!Most genuine lawyers I’ve ever met...they were very detailed and kept me informed about the process every step of the way... These guys have a genuine passion for law and will work endlessly to ensure a favorable outcome... they treat you like family which is what everyone needs when faced with a situation...

NJ Traffic Violations | How Many Points Before I Lose My License?